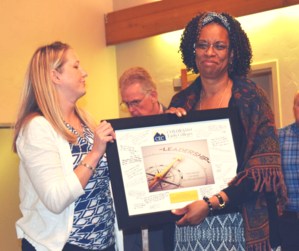 Colorado Early Colleges (CEC) Administrator Keith King calls this year’s Board Retreat the ‘most significant’ in the history of the organization. King started the non-profit 11 years ago to give Colorado students the opportunity to achieve and dream big. He wanted students to have the opportunity to earn an associate degree before leaving high school.
Now, as King continues the transition to 2020 retirement, the network of schools—specifically the network office—is already seeing big changes.
King announced at the retreat—held Oct. 20 and 21 at the Franciscan Center in Colorado Springs—some of these transitions. He reported that Sandi Brown will fulfill the newly created position of CEC Executive Administrator. In this new role, which starts Jan. 1, 2018, Brown will oversee all school-based and academic programs including curriculum, school finances. Brown, currently CEC Fort Collins Head of School, will remain in Fort Collins in her new position.
“I am honored and humbled to be considered for the new role of the Executive Administrator,” said Brown, who will continue to report to King. “The vision and mission of CEC continues to be shared across our state and I am excited to be a part of this team, which takes serving students to a level that no other organization has accomplished.”
Upon CEC Board approval in November, the network will begin advertising a second new role, CEC Chief Administrator, which will be advertised and open to the public. The person hired in this role will start Jan. 1, 2018.
King will continue in his role as Administrator, but says his position will continue to evolve as he prepares for his retirement in 2020.
“This retreat is one of the most significant retreats that we’ve had, based on the fact that we have started to transition,” King said. “It will give us the opportunity for the next generation of leadership.”
CEC learned at the retreat that two CEC Leadership members are leaving the network: Scott Anderson, Chief Financial Officer, and John White, CEC Parker (CECP) Dean of Admissions, are moving on to other opportunities.
“We are honored that Scott Anderson served on our Governing Board and then as our Chief Financial Officer,” King said. “He helped us become more efficient as an organization. We understand his decision to stay in Fort Collins with his family—that’s a higher calling, and we respect that.”
CEC Parker Head of School Alex Tuel, Ed.D., said John White will be deeply missed.
“John White has been with CECP since its inception three-and-a-half years ago and was a vital part in the school’s growth and success,” he said. “John has a true passion for student success and the mission of CECP. We wish him good fortune and success in his new adventure.”
King said there are more Network office changes, which will be announced in the next newsletter.
Photo, top right: Colorado Springs Early Colleges Head of School Jennifer Daugherty present CEC Governing Board President Deborah Hendrix with an award honoring her 11 years of service to the network.
Published October 26, 2017 Print